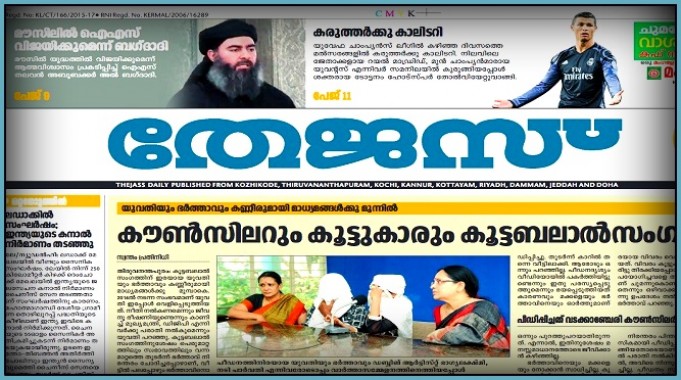 On October 24, Kerala Chief Minister Pinarayi Vijayan, told the legislative assembly that Thejas, a Malayalam daily run by a Muslim management, was the only newspaper in the state being denied government ads and said the reason was that its stories and editorials “promote communalism”, “encourage extremism”, “promote religious hatred” and “destroy communal harmony”.

Vijayan also referred to the origins of the ban, saying that it originated in a letter from the Union Home Ministry in 2009 stating: “Thejas is part of a pan-Islamic publication network catering to the communal agenda of certain organisations. The publication invariably takes anti-establishment views on issues such as the plight of Muslims, Kashmir and India’s relations with the US and Israel”.

Vijayan added that the government was also guided by another letter, sent by the state’s Additional DGP (Intelligence) in 2012, asking the government to stop giving advertisements to the newspaper.

Sources in Thejas told me that the 2009 letter was a result of political rivalry between the CPI(M) and the Popular Front of India – Thejas is run by a trust linked to the Popular Front of India. Veteran journalist, N. P. Chekkutty, who edits the newspaper, denied the government’s accusation. ‘’The government charges are baseless, we stand for ethical journalism and  are committed to the rights of the minorities, dalits and backwards in Indian society.’’

Chekkutty added: ‘’I do not think the CM’s statement in the assembly is based on any facts. He relies only on police intelligence reports and these reports are baseless and were concocted by interested parties.’

Chekkutty said the paper follows every government rule laid down to run a publication. ‘Anyone can check it for any of these sorts of things they allege, and I am sure they will be disappointed. We are a responsible newspaper and we do our work with care. So far no one has been able to file even a single serious case against us in a court of law and get an order against us,’ he said.

Questioning the credibility of the official letters on which the government has based the advertisement ban, he said the 2009 letter was based on faulty information fed by ‘’interested’’ parties.  ‘’I had written to the India Government and also met the then home minister Sushil Kumar Shinde over it and requested him to institute an independent inquiry into the Thejas columns/reports, etc.,  and activities. The government has not done so, obviously because the government did not consider us a threat to our nation’s unity or integrity,” said Chekkutty.

He also dismissed the 2012 letter, calling the author “an officer who was later removed from a senior position by this same chief minister for his alleged partisan attitudes and professional inefficiency”.

Thejas seems to keep rubbing the authorities up the wrong way. In 2013, the Additional District Magistrates of Calicut and Trivandrum, under the provisions of the Press and Registration of Books Act (PRB) 1867, issued a notice to the newspaper.

The notice said: “It has come to the notice [of the government] that the newspaper is publishing news items, articles and editorials seriously affecting the national interests and national unity”. The notice called on the printer and publisher to explain why action should not be taken against the newspaper under the PRB Act and its publication stopped.

The newspaper, in its reply, denied the allegations against it and defended the articles which were cited later as proof of this allegation. But after filing its replies and appearing in person before the investigating officer, no further steps were taken by the government.

The Kerala Union of Working Journalists opposes the ad ban. “A fault found once may not be a fault lasting forever. To deny ad revenue permanently is injustice. The government should reconsider this breath-snatching,” the union said in a statement on November 1. ‘’Every kind of idea – both supportive and opposing – should find its space in media. And it is not a criminal offence. If news items affecting public interests are published, what needs to be done is legal action against it, not placing the entire newspaper on the anti-national side.’’

B.R.P. Bhaskar, a widely respected journalist in Kerala, agreed with the union, saying the government must review the action it has taken. “If the reasons mentioned by the Chief Minister are genuine, what the government should do is to prosecute the newspaper and not just deny it advertisements. N.P. Chekkuty has openly challenged the government to jail him and, if the law permits, hang him,’’ said Bhaskar.

K. A. Salim, a senior journalist with Thejas and head of its Delhi bureau, says the ad ban is politically motivated and the people who suffer from it are the employees. ‘’They work with low wages. Wage board recommendations for journalists are yet to be implemented at Thejas. Employees are still fighting the management demanding this. And the management says they can’t do much because the newspaper doesn’t get the government ads,’ said Salim.

He pointed out that many Thejas employees are not Popular Front of India members or even Muslims. “Popular Front activists constitute less than 40 per cent of the entire Thejas work force. This is less than five per cent when it comes to the journalists working with the newspaper. And almost half of the employees are non-Muslims,” he said.

Muhammed Sabith, formerly with Thejas, is an independent journalist and educator. He can be reached at sabith.muhemmad@gmail.com