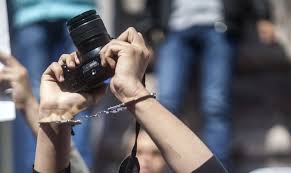 On November 6, CPJ and See Media released a new documentary film, “Under Threat,” that highlights the perils of working for Egyptian media across the political spectrum and examines the media environment under President al-Sisi ahead of Egypt’s parliamentary vote.

CPJ has documented an unprecedented number of anti-press abuses, including six journalists killed and dozens detained since the military took over in July 2013. While most of the journalists have been released, Egypt is still holding at least 11 journalists behind bars, three of whom are affiliated with Al-Jazeera.

We want to hear from you. Tell us what you think and we will help convey your message to the world, so that al-Sisi’s government doesn’t get the last word on Egypt.

What can a press freedom organization such as CPJ do to help incarcerated journalists inside Egypt? How can we achieve justice for the journalists who have been killed? What can Egyptian journalists do to support their colleagues?