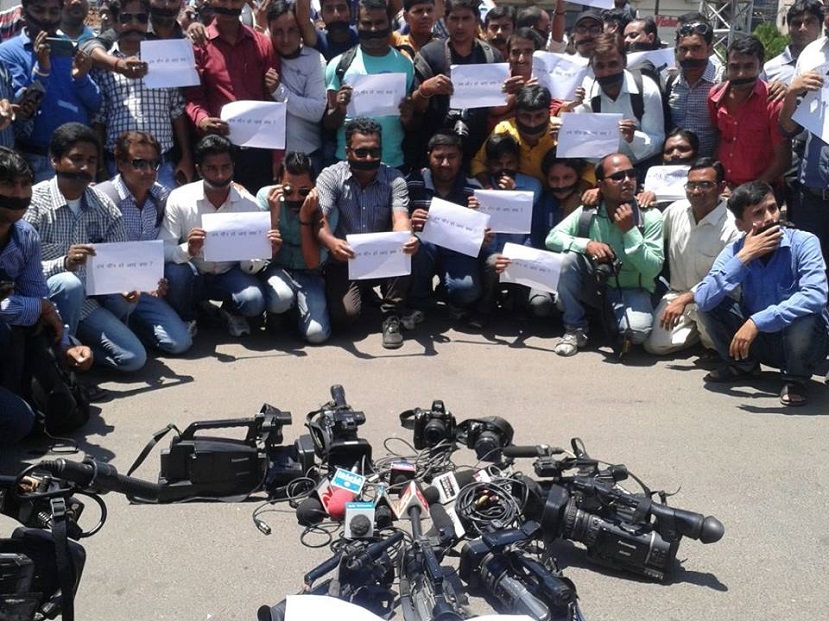 Published: 19th Jul 2015 07:33:34 AM
MUMBAI:In Maharashtra, a journalist is either attacked or abused every five days. Forty-five journalists have been brutally assaulted and one murdered since January alone. Maharashtra—earlier known for its liberal views—has of late become very unsafe for journalists.

The issue of safety of journalists was underpinned once again after Raghvendra Dube, editor of a Hindi magazine on Mira Road in the suburbs of Mumbai, was murdered on Friday after he raised his voice against the alleged nexus between bar owners and police. Dube had an argument with the police after staffers of White House orchestra bar allegedly assaulted reporters Santosh Mishra and Shashi Sharma when they were covering a police raid on the bar. The police had raided the bar for conducting illegal activities. They rescued 14 girls illegally dancing in front of several customers. In Maharashtra, dance is banned in the orchestra bars.

Statistics available with Patrakar Halla Virodhi Kruti Samiti (PHVKS), a journalists association working for their protection, represent a grim picture on the community’s safety in the state. It shows that the number of attacks on journalists is rising every year. In 2014, the number of attacks was 82, a rise by 20 from 2013. At least 20 journalists have been killed in last 20 years while discharging their duty.

Unorganised journalists from rural areas are an easy target for politicians. Records show in most cases journalists are beaten up for exposing their misdeeds. There have also been several cases where journalists have been falsely implicated to gag them.

Mumbai-based Tarakant Dwivedi, also known as Akela, is one such victim of the authority’s highhandedness. In 2010, he was booked for leaking official secrets after he reported on how the weapons meant for Railway Police use were lying in a dark room full of mud and seeping water. Akela had to fight a legal battle for four years against the draconian act. Finally, the Bombay High Court squashed the First Information Report (FIR) filed against him. The High Court had mentioned that the police should have awarded the journalist for highlighting sorry state of their weapons instead of booking him for the wrong reason.

Deshmukh says lack of a strong act providing protection to journalists is the reason behind the growing attacks. For the past eight years, the PHVKS has been demanding that attacking a journalist be made a non-bailable offence. However, the government has not acted on this matter.

“The number of attacks on doctors has drastically come down after the crime was made non-bailable. We are demanding a similar provision in case of the journalists too. I agree, there might be a few cases where the act could be misused but that holds true for every law. It does not mean the act/law shouldn’t be enacted at all,” Deshmukh says.

A draft prepared by senior bureaucrat Anand Kulkarni had a provision of punishing a journalist if he/she misuses the act. However, the draft has not yet got a final shape. The need of the act is highlighted in case of a Raigad-based journalist Janardan Patil, who was assaulted for exposing local politicians in 2005. Almost a decade has passed but his case has not come up for a hearing in the court.

Maharashtra governor Vidyasagar Rao has written to Chief Minister Devendra Fadnavis asking him to consider enacting a law to protect journalists. Fadnavis said he will consider the proposal. “Attacks on journalists are a matter of concern. I hope any such act will come into existence for genuine journalists,” he says.