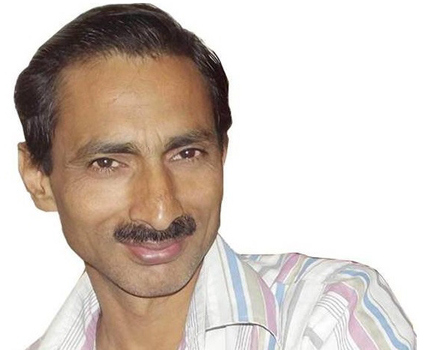 media, which made an outrageous song and dance for trivial instances like when an abusive journalist was merely shoved around, has preferred to give short shrift to a ‘small-time’, vernacular journalist’s alleged fiery murder by policemen on the orders of a state minister, whose misdeeds he exposed.
The journalist, Jagendra Singh, 42, from Shahjahanpur in Uttar Pradesh, had exposed a lot of things against the minister, including land-grabbing, illegal mining, etc.
At first, the minister’s associates assaulted him on 28 April 2015, but no one was arrested. On 15th May, a first information report (FIR) was booked against Jagendra Singh under Section 307 (attempt to murder) and 363 (kidnapping) of the Indian Penal Code (IPC).
The police went to “arrest” him on 1st June, but claimed that he went to the terrace of his house and set himself afire.
He succumbed to burn injuries at King George Medical University (KGMU) in Lucknow on 8th June.
Read more
No one in the ‘national’ media thought it fit to report the news at first, but hell was raised by furious family members who refused to perform his last rites unless an FIR was filed against the minister, the cops and his associates. The police had no option and a case was finally registered.
Rammurti Singh Verma, who is the Backward Class Welfare Minister of State (MoS) in the Akhilesh Singh Yadav-led Samajwadi Party government, and his aides had been threatening him with dire consequences since long for exposing his misdeeds, the slain journalist’s family alleged.
What was worse, an anganwadi worker had accused this minister of gang-raping her along with his aides. Only a couple of local Hindi newspapers carried this story. Jagendra Singh had also reported this.
The alleged gang-rape occurred in a Public Works’ Department (PWD) ‘guest house’, the favourite haunt of politicians, on 15th April. The local police had refused to register a case, but the victim went to court, which ordered an inquiry. The victim also alleged that the minister and his henchmen threatened her with dire consequences if she reported the incident to anybody. (http://www.nyoooz.com/lucknow/115362/state-minister-rammurti-faces-gangrape-allegation)
In both these cases, the officer in charge of the local police station, Sriprakash Rai, has been named as an accused. Mr Rai had threated the rape victim against filing an FIR and in the journalist’s case had poured petrol and set him on fire, it is alleged.
The journalist had repeated his allegations against minister Verma and police officer Rai while being treated in a serious condition in the hospital.
Again, shamelessly, in the MSM, there were only cursory, inside page stories, no prime time mention—forget high-decibel and outrageous debates—on national channels with the usual MSM suspects. Was it “tyranny of distance”? Or was it something else?
This writer looked at quite a few online newspapers. All were cursory police press-release reporting, no mention about the gang-rape at all, except for passing mention in the Hindustan Times (Delhi), which again buried this story on Page 11 as a single column news item.
I also took a look at 1:26pm on 10 June 2015, and there was no mention on the front page of NDTV’s website, for example. I checked India Today’s website: Zilch (Remember the hell raised by Mr Sardesai and his associates?). Firstpost: Zilch.
Oh! I forgot, many in the MSM don’t consider some anti-corruption crusaders or social media activists as ‘journalists’ outside their definitions. He ran an ‘online’ Hindi paper and so did not belong to their elite ‘fraternity’.
The alleged shoving around of Rajdeep Sardesai in New York was made a big issue by the MSM. They tried to gloss over the fact that it was this elite journalist who provoked the people and abused them.
But ‘low-level’ journalists who do not conform to the majority views are just collateral damage.
No wonder that the MSM today is the subject of hate, having replaced politicians as Number 1 crooks.
http://www.moneylife.in/article/journalists-murder-in-a-secular-state-is-no-big-news/42235.html15
http://www.kractivist.org/journalist-jagendra-singh-allegedly-burnt-alive-by-cops-for-writing-against-politician-on-fb/