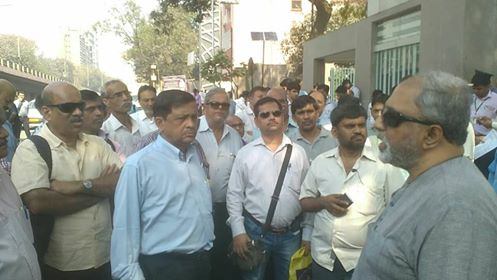 More than 150 journalists and non-journalist employees of several newspapers and a news agency today held an hour-long spirited demonstration before the Hindustan Times (HT) office in the country’s commercial capital Mumbai raising slogans against the mass termination of media employees.

Today’s demonstration in front of HT office in India Bulls Towers, Senapati Bapat Marg, in Central Mumbai was part of a campaign to ‘Fight undeclared Emergency in the Media’, and oppose sacking of media employees, organised by the Joint Action Committee (JAC) to fight for the Implementation of the Majithia Wage Board for newspaper and news agency employees.

The sacking of over 1000 media employees by Hindustan Times and Anand Bazaar Patrika (ABP) group of Publications in the last few weeks has already shocked and angered media workers all over the country. More so, in the backdrop of the failure of media managements to implement the wage award, the sackings have been totally illegal as well as in breach of the Supreme Court’s order on the implementation of the wage board award.

So much so, scores of newspaper employees have been pushed into an abyss of unemployment and poverty overnight that has unleashed a terrifying environment of fear in the media industry. The current situation is unprecedented in the history of independent India, with newspaper managements determined to brazenly trample laws enacted for the newspaper industry and Supreme Court Orders pertaining to implementation of the Majithia Wage Board Award. Simply put, the newspaper managements, under the banner of the Indian Newspaper Society (INS), have declared war on their employees: this is an undeclared emergency in the media.
The sudden closures and terminations, without any warning or provocation, have already resulted in the tragic and untimely death of Arvind Sharma, a senior staffer of Hindustan Times — soon after his illegal termination by the company.

Later, a memorandum was submitted to the Hindustan Times Ms Chairperson Shobana Bhartia condemning the harassment and coercive action taking against employees after the closure of six editions of the newspaper. The following is an extract from the memorandum submitted to Ms Bhartia:

1. Your act has violated numerous provisions of the law, including Sec 16A of the Working Journalists Act. You are well aware that a three-judge bench of the Supreme Court headed by the then Chief Justice of India P Sathasivam had on Feb 7, 2014 (ABP Pvt Ltd and Onr vs Union of India and Othrs), upheld the Constitutional validity of the Working Journalists Act, 1955, and the amendment Act, 1974, and rejected the contention of improper constitution of the Wage Boards, irregularity in the procedure adopted by the Majithia Wage Board and that Majithia Wage Boards had overlooked the relevant aspects and considered extraneous factors while drafting the recommendations.
2. Your establishment has collected, under Sec 20J, undertakings from your employees, both journalist and non-journalist newspaper employees, on a mass scale, that they do not want the Wage Board. In the Supreme Court, a contempt petition is pending against your establishment to determine whether these are obtained by force or really voluntary? Which sensible journalist will voluntarily accept a lower wage?
3. It is clear that you have decided to close down these editions in other to avoid the implementation of the Supreme Court order and the Majithia Wage Board award.
4. Your action led to untold misery and disrupted the lives of scores of employees, besides leading to the tragic and untimely death of a senior staffer of Hindustan Times — soon after his illegal termination by the company. Your callousness and cynical apathy only shows how much you are only concerned with the maximisation of profits.
5. We do not accept your excuse that demonetisation has forced you to take this step because, although it is only a three month old process, you have evaded the process of implementation for more than three years.
The JAC demanded the restoration of editions with reinstatement of all employees and implement the Majithia Wage Board Award in toto, thereby maintaining the spirit and letter of the Supreme Court verdict in this regard.

The JAC also maintains that this ‘current situation of undeclared emergency’ in the media is a cause of concern for the public at large. How can newspaper employees who are routinely terrorized by their employers and denied basic rights be expected to fight for the larger rights of society? How can the watch-dogs of society function when they are ‘defanged’ by their employers, the so-called guardians of freedom of speech and expression?

This owner-created climate of fear in the media has also led to the unchecked proliferation of paid news as well as fake news. And this is a cause of concern for all citizens.
All those who care for the flowering of democratic freedoms in the country should come together to ensure that the law of the land should be strictly implemented first in the Fourth Estate itself !